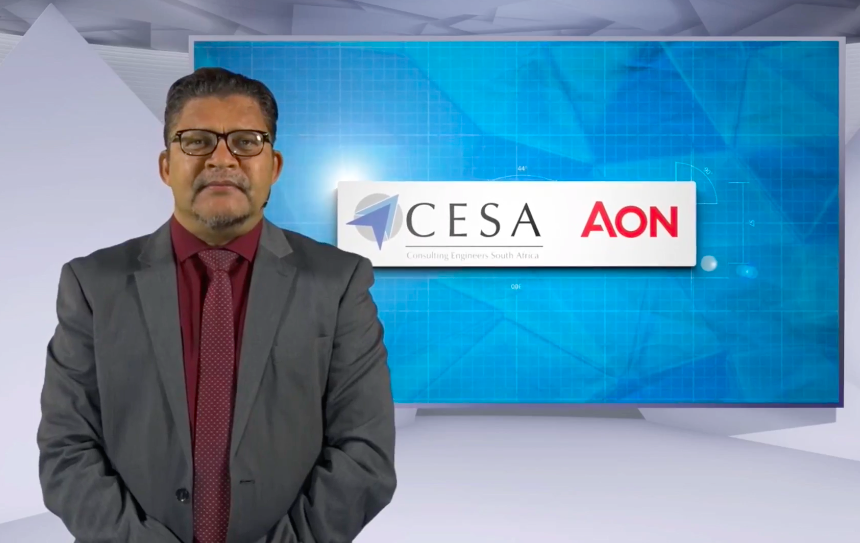 11 November 2021. “2021 was a major milestone for the CESA Aon Engineering Excellence Awards as it commemorated the support of Aon South Africa as a strategic partner to CESA and a platinum title sponsor  of the event for the past 22 years,” stated CESA CEO Chris Campbell. This flagship event in the consulting engineering industry took place on Wednesday, 10 November virtually.

In his remarks, Aon South Africa CEO Terence Williams said as a long standing sponsor, Aon has a deep appreciation of the contribution of the engineering industry to our economy and society. “The 2021 CESA Aon Engineering Excellence Awards are about innovation and excellence in unprecedented times. It is an opportunity to celebrate the fact that you have embraced risk for the opportunity that it presents,” stated Williams.

Dr Dempsey Naidoo received the Lifetime Industry Achievement Award for his contribution to the profession, with a career spanning 37 years in the infrastructure, engineering, business creation and management sectors. The Visionary Client of the Year recognition went to Trans African Concessions (TRAC). TRACs involvement in social and entrepreneurial development, job creation and training, and skills transfer in a variety of fields in the construction industry has made a significant impact – not only in the lives of ordinary citizens, but also through the opportunities afforded to local consulting engineers and the construction industry at large.

In the category of Mega Projects with a value greater than R1-billion, Ritchie Midgley Consulting Engineers received a Commendation for the Leonardo, a development located in Sandton developed by the Legacy Group.

In the category Projects with a value between R250-million and R1-billion, Zutari was the winner for 16 on Bree located in Cape Town developed by FWJK Developments with AECOM receiving a Commendation for the Upgrading of National Route 7 Section 1 from Atlantis South to Kalbaskraal for SANRAL.

Bosch Projects and Zutari were named joint winners in the category for Projects between R50-million and R250-million, for the UCL 175 TCH Factory Expansion for UCL Company; and the Kruisvallei Hydropower for Zevobuzz (RF); respectively. Knight Piésold were awarded a Commendation in  this category for the Design & Construction of the Emoyeni Reservoir for eThekwini Municipality.

Zutari emerged victorious again in the Projects with a value less than R50-million category. This time the award was for the Kuils River Corridor Upgrade on behalf of the City of Cape Town’s Water and Sanitation Department.

Further, each year, CESA recognises the contribution young engineers make to the profession, with Zutari’s Confidence Tshilande named Young Engineer of the Year and Spoormaker & Partners’ Deo du Plessis received a Commendation in this category.

Publishing Excellence in the Trade Publications category went to Creamer Media, publisher of Engineering News and Mining Weekly, while the Daily Newspaper category was awarded to Arena Holdings.