29 January 2020 Consulting Engineers South Africa's (CESA) newly elected President, Sugen Pillay, presented his presidential message and theme for the year at a function held in Johannesburg this morning. Pillay's 2020 theme is '2020 - A time for Reflection, Renewal and Regeneration'.

Pillay began his presentation by stating, "South Africa once again finds itself in the throes of a new era, and we are certainly in a period of great change but there is also a sense that through this process, that we are indeed in a period of renewal and regeneration."

Pillay went on to expand on CESA’s thinking on some of the key issues that are facing the industry demonstrating CESA’s commitment towards the nation’s renewal and regeneration project in terms of the practical solutions that the organisation can offer with a number of changes that they are imploring the country’s leadership to implement.

Reflection
Pillay detailed a few critical issues affecting the industry, including the tragedy of state capture, although noting that President Ramaphosa reiterated in his January 8th statement that building a capable state will be one of the core priorities this year. The continuous decline in audit outcomes across all levels of government, as contained in the annual Auditor General reports, and the resulting negative impact that this has had on service delivery as well as the continuous change in regulations.

He discussed the decimation of the construction sector and in particular the effects on large contractors the medium sized and smaller contractors also not faring any better. He believes that the key issue is the lack of opportunities coupled with delayed payments for completed work.

The reason that so many contractors find themselves in financial distress is that a project pipeline has not been forthcoming. “If this decline in the construction value chain is not arrested as a matter of urgency, the entire construction value chain will be decimated within a very short space of time. The consequences for the economy and for the country will be catastrophic,” states Pillay.

He believes that this coupled with the looming threat of a ratings downgrade and the impact that it may have of the state’s ability to fund further infrastructure development and the general lack of confidence in the state and in the economy, coupled with uncertainty, has resulted in low levels of investment by the private sector.

Pillay then went on to discuss the notable successes over this period highlighting the country’s potential for recovery which included the fact that BBBEE and in particular the Sector Scorecard has ensured that the sector continues to transform and has resulted in opportunities for a large number of firms. Pillay reported that, “approximately 60% of our member firms are now majority black owned, approximately 14% have Black women Ownership greater than 30%, and as a Broad-Based measure, in excess of 60% are either have a Level 1 or Level 2 rating.”

Pillay stated, “CESA is concerned that the pace of change is frustratingly slow and we must reiterate that we do not have the luxury of time to address our challenges”.

Renewal
Pillay stated that CESA has hope that the process of Renewal and Regeneration has indeed started with the Zondo commission which is slowly unearthing the scale and depth of state capture. One of CESA’s core principles is that of integrity and ethical commercial dealings and the work of the commission is very much in line with CESA’s stance on corruption.

CESA welcomes the added powers that the Auditor General’s office has been granted in that it will now be able to ensure that its recommendations and corrective actions must be implemented. “We believe that the Planning, Monitoring and Evaluation Directorate in the Presidency needs to be further capacitated so that it can facilitate inter-governmental dialogue when stumbling blocks regarding the interpretation of regulations are encountered. There is also often no appreciation for the construction contracts that govern the Client Contractor relationship, and the interpretation of regulations tend to be in conflict with these contracts”, states Pillay.

CESA welcomes efforts towards the re-capacitation of the leadership at key state institutions that are large infrastructure developers such as Department of Public Works and Infrastructure (DPWI), the Department of Human Settlements Water and Sanitation (DHSWS), Eskom, etc.

CESA is also calling for programmes that are working, such as the Independent Power Producers (IPP) programme, to be restarted and in particular the 5th round of bidding of the renewables programme. In addition to its value as a short-term intervention towards addressing our electricity crisis, it will also inject much needed project opportunities for consulting engineers and contractors.

Regeneration
CESA currently boasts a membership in excess of 580 member companies that employ approximately 21,000 people. Pillay says, “Within CESA we have the expertise, experience and capacity, in a country that is crying out for infrastructure development, whilst many of our member companies are confronted with underutilised expertise, which results in the retrenchment of key skills and resources while many government departments are under-resourced, and cannot effectively plan and implement infrastructure projects.”

CESA’s call is that, as a short to medium term measure, the capacity that exists within the private sector should be utilised to, firstly, capacitate the state, and also to mentor some of the young engineers that are currently employed in the state. The Owner’s Engineer concept needs to be embraced as a short-term intervention, as well as secondments from the private sector, to boost public sector capacity. CESA’s members are also willing to volunteer some of their services, within a structured framework, to unlock project opportunities.

CESA welcomes the establishment of the Infrastructure and Investment Office and is pleased to see that it resides within the Presidency. CESA has long been calling for an Engineer General to oversee major infrastructure development in the country and believes that this office will become the de-facto Engineer General in the country. CESA is cautiously optimistic that the Infrastructure Fund that will be housed within the Development Bank of South Africa (DBSA) will also start to gear into action, so that funding for project preparation can be unlocked.

CESA is committed to the competitive sourcing of professional services, but is adamant that competition cannot be based on price alone. CESA has long advocated for Quality Cost Based Selection (QCBS) for professional services, so that quality enabling innovative design and functionality, play a key role in the selection process. The concept of value for money must be reintroduced into the procurement process. 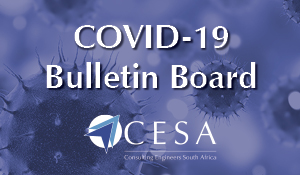 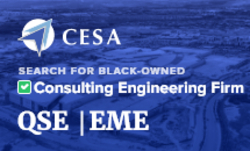